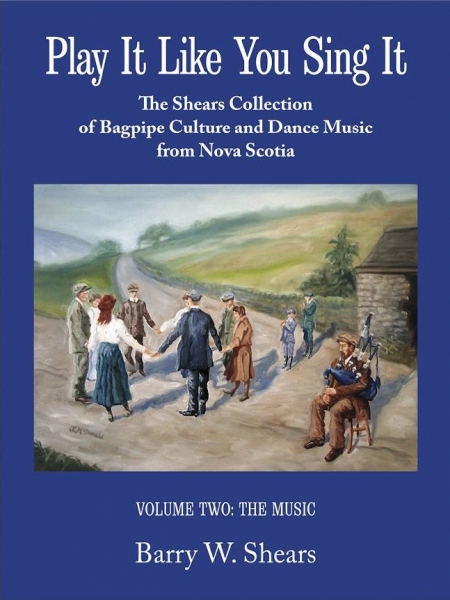 The history of the Great Highland bagpipes in Nova Scotia began in the 1750s. Scottish and Highland piping traditions continued in Nova Scotia for over 250 years, through periods of immigration, community building, Confederation, economic out-migration, and two world wars. In Gaelic communities of the mainland and Cape Breton, throughout the 19th century bagpipe music was interwoven with fiddle music, Gaelic singing, and traditional and evolving dance traditions. A unique form of dance music emerged and flourished in the late 19th and early 20th centuries, characterized by lively jigs and rousing strathspeys, reels, and quicksteps. Many of these tunes existed in multiple regional variations before the modern standardization of piping. Many also had corresponding Gaelic words known as puirt-á-beul or mouth music, which were often used to teach and transmit pipe music within in families and communities, as well as providing enjoyment in daily life. These books are an examination of the piping traditions in the last significant area of Highland settlement in North America –Nova Scotia.

Volume Two: The Music presents bagpipe arrangements and their Gaelic words as they were played in Nova Scotia. The book contains 230 settings of pipe tunes, 19 fiddle tune settings connected to the piping tradition, and over 85 sets of port-á-beul lyrics with English translations. It is illustrated with 75 images of Nova Scotian pipers.

"The historical importance of this collection is immense in the vaunted and sometimes misunderstood world of traditional piping. The first of the two volumes contains the cultural and personal histories of the pipers and the communities in which they lived, with discussion of personal and regional styles, and the environment of song and dance. The many photographs in both volumes are worth the cover price alone. The second is filled with 249 tunes, which are accompanied by more photographs, context and history.. .. These two volumes of massive research are a refreshing return to the well of tradition."
John Dally, Common Stock, Journal of the LBPS, December, 2018.

"Many conventional piping histories told from a Scottish perspective end at the point at which a distinguished player emigrates to the New World – John Roy MacKay leaving Gairloch in 1805, for instance, bound for Nova Scotia, or Condullie Rankin leading his Coll tenants to Prince Edward Island in 1820.
"In this massive new work, Barry Shears seeks to answer the question: 'what happened next?,' at least with regard to the piping community in Nova Scotia on Canada's Eastern Seaboard. In a tour de force of locally-based research Shears picks up the story with the earliest immigrants from the Gàidhealtachd in the 1770s through to the last throws of a distinctive home-based dance culture, in which pipers played a significant part, in the mid-20th century There is a lot in this collection, then, and the whole production bears the hallmark of a labour of love. The tune layout is exceptional, with two or three tunes to each page, and with tune notes, associated lyrics, pictures and most importantly concordances with other printed sources presented directly opposite."
Iain MacInnes, Reviewed in the Piper and Drummer, Spring 2019.